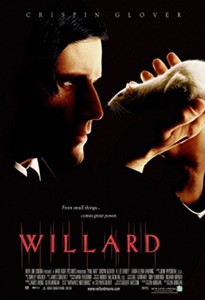 Willard the movie has been highly sought after. I'm not even sure how to describe it myself, but very suspenseful, and if one has never heard of the movie, and give it a first time watch, you couldn't keep your eyes off the screen. It's a dang good movie, and definitely one worthy of my movie collection, which happen to contain a lot of suspenseful type movies. I like a little thriller, suspense combination in my flicks.

The movie "Willard" is about some what of an odd character/outcast, or perhaps an isolated, in his own world outcast, who has the responsibility of taking care of his elderly mother, and makes his social life pretty much just that, and his work, where things can be quite stressful for him, on the way he is treated, and especially by his boss, who took over the company after his father passed away. So you can see where the friction begins to take place, and he's the perfect character to bend to the will on how things are played out. However, there is a gal at the office who is nice to him, and feels sorry for him. He begins to have an attachment for her.

At the same time back home, which happens to be an old run down mansion, something out of the movie, with an elderly mother to take of, Willard becomes very attached to the rats that live there. He befriends them, is obsessed by them, and trains them for his bidding. Tricks at first, then mischief, and then later down the road murder.

All kinds of things pop up for poor Willard, adding more to his stress level, which is clearly starting to become some form of a mild mental illness, not quite there, a couple cans short of a 6 pack. The rats seem to be taking an every more presence in his life, and daily activities, and are also starting to add to his already stressed thinking cap. This goes on, right up to the end of the movie, so it makes a person wonder, will there be a squeal to Willard?

But back to the movie, things are clearly starting to get out of hand, in his day, to day life, and without spoiling the movie, these rats that he befriended, are the worst thing that's happened to him, that just gave him temporary joy at the beginning. His life was bad enough, and these things just made it worse, and have a feeling they are not done with him yet, nor he them. Willard the movie is an awesome flick, and reminds me so much of the old time horror movies, and this is horror a little, especially when you consider the rats. The movie is suspenseful and it's a thriller in some ways. As I said above, and will say again, definitely a movie for the collection, if you're into this kind of genre.

This movie seems to becoming a cult classic of some sort, and the popularity of this movie seems to be growing. I'm not sure if there is a Willard sequel. Now if that movie "Ben" was the first, or has anything to do with this movie, or if the concept was taken from that movie, that I do not know. I'll look into that a little more, and when I figure that out, I'll update the page.

​If you're interesting in purchasing the Willard 2003 Movie DVD, then Click Here to order from Amazon. Shipped quickly, and safe guaranteed.